Messy Leadership: Beware of The Ego

Messy Leadership: Beware of The Ego

When Cees ‘t Hart became CEO of the global brewery and beverage company Carlsberg Company, he did something radically different in the eyes of company stakeholders. He eschewed his top floor corner office and private lift – signs of his power and importance within the company- for an empty desk within the open floor office plan, on a lower floor. When asked why he had made the move, he said; “If I don’t meet people, I won’t get to know what they think. And If I don’t have a finger on the pulse of the organisation, I can’t lead effectively.”

This story mightn’t seem like much at first glance, but it’s a great example of a leader who has proactively tried to shift the notion that leadership is a solitary process, where there is one person responsible for steering the ship and making decisions. This style of thinking can actually be very damaging to an organisation, as it creates an insulated bubble around oneself; where your level of responsibility and seniority separates you from the pack. When this happens - as Cees ‘t Hart expressed- you run the risk of losing touch with your colleagues, your organisation’s culture and your clients.

This view of leadership as a solitary action, where one person is expected to have all the answers, is challenged in the latest research conducted by the global consulting company BTS. In the company’s latest whitepaper The Uncommon Sense of Messy Leadership, BTS collated responses of over 40 of the world’s most senior leaders accountable for leadership learning, who shared their experiences, their actions and the resulting outcomes during one of the most turbulent times in recent history; COVID-19. This information was then not only augmented with data collected from an additional 40 companies, but BTS’s own mindset research, which is based on data from over 100, 000 coaching conversations. This research has revealed a new frontier of leadership that has emerged from the covid crisis; Messy Leadership. Messy Leadership refers to the key mindsets and behaviors that have allowed executives to successfully lead rapid transformations within a company, or fast-growth companies that were able to push the boundaries and thrive within the messiness of 2020. One mindset BTS focus on within this whitepaper is the ego; a leader’s sense of self-esteem and importance, and how it can act as a barrier in leading effectively.

Within The Uncommon Sense of Messy Leadership, ego is referred to as the ‘superhero syndrome’, where an individual leader feels they have to make the decisions and call the shots. This is a very traditional view of leadership which relies on the person with the biggest title, or highest level of responsibility to therefore have the greatest level of knowledge or expertise. David Owen, the former British Foreign Secretary and a neurologist and Jonathan Davidson, a professor of psychiatry and behavioural sciences at Duke University, touch on this in their own research on leadership.  They describe the mindset of a leader who becomes so absorbed in their own influence and responsibility as ‘hubris syndrome,’ the disorder of the possession of power, particularly power that has been associated with overwhelming success, held for a period of years.” This sounds extreme, but ego-driven leadership doesn’t always look like an oppressive dictator, barking orders at their staff, or an out-and-proud narcissist who loves the sound of their own voice. Ego-driven behaviour can include less obvious things like feeling pressure to always have the final say on a decision or not wanting to consult or reach out to others on a topic for fear of looking or feeling inadequate.

Typically, in a crisis, we will look to our leaders or those in a position of power for guidance. This has been demonstrated globally this year, with countries looking to their top politicians - their presidents and health ministers – to provide us with answers during covid. Interestingly, in BTS’s research the leaders who had always ‘led from the front’ pre-covid and had driven their teams to higher and higher performance during stabler times, began to struggle during the early onset of the pandemic. In BTS research, these leaders were creating logjams and inhibiting creativity in their effort to try and ‘control’ the situation. The problem was, the pace of change became too fast – data on the virus, on social distancing, border closures - was constantly changing and at such a rapid rate, that it became too much for one mind to comprehend it all. Furthermore, COVID-19 itself was unprecedented, no one had ever come across a virus like it and consequently no one could provide definitive answers. 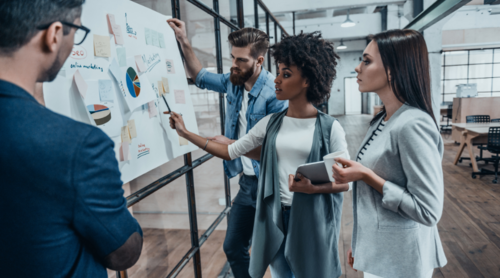 The Power of The Unknown

On the flipside, when interviewing the leaders that were leaning into this sense of unknown and the vulnerability that came with this, BTS found these leaders were able to achieve extraordinary things. Things like shutting down entire offices and moving their staff to work-from-home or pivoting their business strategy from in-person retailers to e-commerce businesses in a matter of days. Normally these results, would have taken years to achieve but these teams were able to achieve it in a matter of days or weeks. So how did they achieve it? BTS’s data indicates it was because these teams had leaders at the helm who were willing to surrender their expertise and become relentlessly curious. They were open about not having all the answers and consequently, actively sought outside perspectives. This encouraged greater collaboration and knowledge sharing within the team and made them that much more efficient in creatively resolving or working through the hurdles presented to them.

This new style of leadership, where CEOs and managing directors are casting their egos aside in their quest to progress their teams and businesses forward, is supported in a recent article by Forbes, where 19 founders and CEOs discuss their leadership styles during COVID-19. A common thread in all of the responses was the ability to check their ego at the door; instead of focusing on controlling and corralling their team, they embraced the help and contribution from others:

Felisa Palagia, CEO of the Salesforce consulting firm Internet Creations, found that her team were able to achieve so much more - better utilise employee talents, set up work from home environments, roll out a global pandemic business continuity plan and deliver daily company updates- once she relinquished some of her control and responsibility to the wider team. “It’s been a huge change, but instead of panic and chaos, we’re seeing employee-led collaboration and incredible new ideas.” She said.

Meanwhile, Chetan Shah, co-founder and CEO of consulting firm Effectus Partners LLC discovered that including his entire team in strategic discussions with clients directly, has helped to remove fear and encouraged innovation. “Enabling them (our workforce) to be in the know has removed FUD (fear, uncertainty, and doubt) and, in fact, made them feel empowered to think innovatively and be disciplined in executing revised strategies,” he said.

Megan Cunningham, founder and CEO of media agency Magnet Media, admitted she initially found it quite hard to relinquish control and lean-in to the uncertainness of the time. Initially she would agonise over the perfect word choice, tone and level of detail going into her daily company-wide communication. Then she realised that communicating and informing her team in smaller, more informal meetings and one-on-one appointments were more impactful. “That approach is not my natural style—I'm a fan of professional boundaries, honestly, and work hard to maintain them. But these days, we all have to get out of our comfort zone. And this personalized check-in strategy has had a much bigger impact.”

It’s quite remarkable that despite working within different industries, doing completely different things, organisations and team leaders can share similar responses to handling the covid crisis. It also highlights that leadership styles that might have worked pre-covid (leading from the front, maintaining a strict hierarchy and making all the calls) won’t work in these extraordinary times; relying on past training or processes will produce past results. However, as both BTS research and stories from current leaders suggest, shifting away from the insular belief that leadership is a solo activity can ensure change is achieved at a faster pace. Having the strength as a leader, to lean into the unknown, embrace collaboration and create an environment where your team feel confident to author the new moves, will help both you and your organisation to weather and ensure times of drastic change and uncertainty.

To find out more about Messy Leadership and the role the ego plays in effectively leading a team through change and uncertainty, join BTS leaders Jerry Connor, Stephanie Peskett and Rosie Connor, as they discuss the impact this research will have on the future of leadership and organisations in an interactive webinar with Public Sector People, happening on December 9.

This webinar is the first in the new series, ‘Prioritising People’, which aims to provide free interactive sessions that focusing on subjects directly impacting the Public Sector including Leadership, Diversity and Inclusion.

To find out more about the series or to attend the interactive webinar, 'The Uncommon Sense of Messy Leadership', click here: