The importance of being an empathetic leader is nothing new. Over the years there has been much research which has indicated the benefits it can provide a workplace, from cultivating better connections with staff members, to developing stronger lines of communication. During COVID-19, the way we worked drastically shifted. Suddenly ‘the business as usual’ model many organisations were operating under seemed irrelevant and outdated; working from nine to five, or being results-driven didn’t seem like an accurate way to determine success amidst the uncertainty within the market and constantly changing goalposts.

This has been reinforced by the latest research done by the global professional services BTS, which believes empathising with employees and showing compassion during these uncertain times is part of the new frontier of leadership and will help organisations adapt and grow, despite challenging times. This concept is explored in the BTS’s latest whitepaper, ‘The Uncommon Sense of Messy Leadership’ which collated responses of over 40 of the world’s most senior leaders accountable for leadership learning. These leaders shared their experiences, their actions and outcomes during COVID-19. This information was then not only augmented with data collected from an additional 40 companies but the BTS mindset research, which is based on data from over 100,000 coaching conversations.

What Is Messy Leadership?

During their research, BTS identified five key attributes within leaders that helped their team and organisation adapt and pivot to the sudden changes and ‘messiness’ resulting from COVID-19, in comparison to the leaders that struggled to stay afloat. These attributes are as follows:

Multiplying Perspectives: Leaders who will advocate ecosystem interdependencies and the societal impact

Emotional Connection: Having the courage to talk about emotive and personal issues as a leader. Being open about bad news and showing compassion.

Seizing Momentum: Leaders who focus on outcomes and being responsive in the moment. Are able to be change ready.

Sensing the Future: Leaders who can see multiple futures and lead fast-cycle experiments

Your Ego- The power of not knowing. Leaders who lean into vulnerability voracious curiosity, humility and letting go of the leader centric view.

One of the stand-out attributes that emerged during BTS’s research was the positive impact showing empathy and compassion had on staff, as well as making a concerted effort to always be transparent with information. Due to the severe nature of the health crisis, naturally the majority of leaders were able to display an extra dose of compassion and care for the welfare of their people.  However, remote work made it difficult for many leaders- especially those who weren’t used to this work-from-home environment- to properly connect and resonate with staff. Previously, many managers might have relied on chance interactions – running into someone in the kitchen or doing a daily walk around the office – to check in with different people. Of course, after organisations shifted to remote work these impromptu interactions weren’t available. BTS found in their research that leaders that put in the extra effort to reach out to their staff each day, and not just briefly check in but take stock of their wellbeing; how they were feeling, how they were finding their workload, how their families were, received favourable reactions from colleagues and higher engagement levels overall.

A respondent who worked at a big US telecommunications company expressed the value in hearing from his CEO every day: “Our CEO, together with our CHRO, has talked to our people every day since early March, and still continues to. He knows people are suffering and wants to be fully transparent, offer guidance and sense of community and serve the team.”

This empathetic and dedicated approach to connecting with people rather than just ‘checking in’ can not only be witnessed in organisations but on the world stage. Managing partner at West Wing Writers, Vinca LaFleur claims New Zealand prime minister Jacinda Ardern is a great example of empathetic leadership.  After announcing New Zealand’s first lockdown Ardern jumped on to Facebook live with her followers to “check in with everyone as we prepare to hunker down for a few weeks”. In solidarity with those who had been financially impacted by the lockdown and pandemic, Ardern also announced in April that she’d take a 20% pay cut to her salary.

Her willingness to display emotion and show that she cares, not only motivated her following- the New Zealand population- in cooperating in the strict lockdown but secured her a landslide victory in New Zealand’s most recent federal election.

“Her winning blend of compassion with firmness, sensitivity with hard science, inspired her country to pull together to stamp out the virus’s spread. Let’s hope that current leaders, would-be leaders, and stakeholders everywhere are taking notes.”  LaFleur said in a recent article. 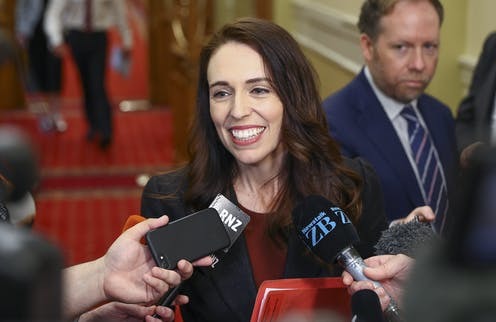 Jacinda Ardern- sourced from The Conversation

Another important trait in BTS’s research into ‘emotional connection’ is the value in transparent communication. BTS found that leaders who didn’t shy away from difficult conversations and remained transparent with their staff were able to gain respect from their team and inspire their companies. COVID-19 proved a very difficult time for many organisations; social distancing impacted multiple industries, travel was halted, and many supply chains went into disarray. As a result, many organisations felt a sudden financial pressure and had to face the tough decision of restructuring their team, which in some cases led to redundancies. Sharing bad news is always difficult, but the respondents in BTS’s research found that the leaders who chose to be transparent about their businesses struggles and inform their staff of a possible restructuring ahead of time, gained more trust from their team than the leaders who tried to hide this information. Their findings demonstrated that people will follow leaders who define reality clearly and are part of the team helping fight to turn the results around.

The importance of communicating with staff, as well as the ability to show empathy have also been highlighted within a recent global survey conducted by the Global Alliance in Management Education (CEMS). The survey focused specifically on the skills employees and business leaders need to thrive post COVID-19 and included responses of over 1,700 professionals; 82% were in a management position and 11% were at the CEO level.  The results of the survey showed that both empathy and the ability to communicate were ranked as some of the most important qualities for leaders since the pandemic began, alongside resilience and cultural intelligence.

Interestingly, results-focus dropped 9 percentage points (58 percent to 49 percent) since 2019, indicating that business leaders wish to judge and be judged on more than just the end result, at least in the short term. Similarly, strategic vision, which had been ranked as the most important leadership quality before COVID-19, had dropped by 6 percentage points by July 2020.

Executive Director of CEMS, Roland Siegers said that these shifting priorities demonstrate our changing views on leadership and what we consider as an important leadership trait.  Traditionally there has always been a focus on how well you could do the job; crunch the numbers, analyse trends and control (as much as possible) the working environment. The fall-out from pandemic has meant any sense of control has been abandoned. Health and safety policies are constantly changing, the global economy has taken a serious dent and the severity of the virus has meant that both the physical and mental health of staff has become paramount. We are in unprecedented times and this as indicated by both the CEMS survey and BTS’s research - has required a higher level of empathy and compassion from organisations.

Leaders that shift their focus away from the end result and instead focus on the people who’ll be helping deliver the end result and connecting with them regularly despite the physical distance, will see a greater response and loyalty form their team.

To find out more about Messy Leadership and the impact emotional connection has had for leaders during COVID-19, you can join the interactive webinar Public Sector People will be running with BTS on December 9. Join BTS leaders Jerry Connor, Stephanie Peskett and Rosie Connor, as they discuss the impact their findings will have on the future of leadership and organisations moving forward.

This webinar is the first of Public Sector People’s new insights series ‘Prioritising People’, which will include a number of interactive sessions focusing on Leadership, Diversity, Inclusion and other subjects which directly impact the Public Sector.

To find out more about the series or to attend the interactive webinar, 'The Uncommon Sense of Messy Leadership', click here: