Unpaid Work: What Is It And Why Is It Affecting Women In The Workplace

Unpaid Work: What Is It And Why Is It Affecting Women In The Workplace

“Women belong in all places where decisions are being made. It shouldn't be that women are the exception." These were the powerful words of U.S Supreme Court Judge and feminist icon Ruth Bader Ginsberg who died earlier this year at the age of 87. While she was speaking specifically to America’s political landscape, the sentiment behind Ruth’s words is relevant globally. Historically, men have always held key leadership positions in business, politics, religion, academics, art and sport and there has been a centuries long battle in shifting these patriarchal roots and ensuring there is an equal representation of men and women within the institutions that make our communities’ key decisions; court hearings, board meetings and parliament sittings to name a few.

However, since 2019 the world has been turned upside down and working men and women across Australia have been forced to work from home. While remote work has always been considered an ally for the working woman- especially a working woman juggling family responsibilities, many have found that their domestic and family responsibilities have increased during this time, making it harder to remain as productive within their day job. Which bodes the question, can remote work help organisation’s like the APS maintain their momentum in regards to gender equality, or could it hinder progress?

The Impact of 'Unpaid Work'

When Public Sector People asked it’s diverse network on what strategies they felt were most effective in developing and progressing women’s careers within the public sector, 71% voted for flexible working arrangements. According to the Australian Fair Work Ombudsman, flexible working arrangements are considered to relate to a person’s hours of work (changes to start and finish times) patterns of work (split shifts or job sharing) and locations of work (working from home).

These arrangements have always been considered to boost the number of female employees in the workplace and encourage women to progress through the pipeline into more senior roles, as they allow women to balance their ‘unpaid work’ –all forms of domestic work, taking care of children, the elderly or family members as well as voluntary community work- with their ‘paid work’ or career. Being able to adjust your hours so that you can work after your children have gone to bed, or being able to work from home so that you’re closer to an elderly relative in your care, for example. 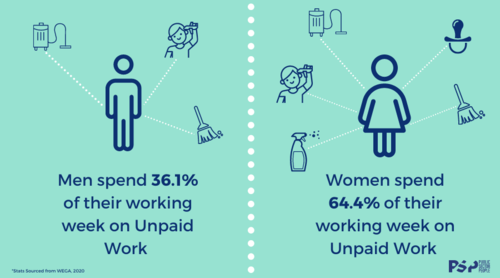 According to the most recent data from the Workplace Gender Equality Agency (WEGA), before COVID-19, women spent 64.4% of their working week on unpaid work, compared to men who spent 36.1% on unpaid work. Furthermore, the WEGA report revealed that the amount of time a woman spends on household and care labour fluctuates considerably during their lifetime. For example, when women become mothers, they tend to do more housework and more child-minding but spend less time in paid employment than men. There are multiple reasons for this like the cost of childcare or the time away from their career when on maternity leave, but a key reason is that flexible working arrangements aren’t always available to working mothers.

This of course changed during the pandemic when all workers across the globe were forced to work from home. The only problem was that in addition to increased flexible work arrangements the level of unpaid work for men and women also increased. Along with the closure of work offices, many schools and day cares closed, which forced parents to not only look after their children within work hours but also be responsible for their home-schooling. Again, this additional burden of unpaid work seems to have been carried disproportionately by women and according to global consulting company McKinsey & Company is a reason that women’s employment (globally) is dropping faster than average. In a recent survey from HR survey analytics company Syndio, 14% of female respondents have said they’ve considered quitting their job during the coronavirus pandemic because of the overwhelming pressure to be an employee, teacher and parent all at once.

While schools in Australia have re-opened and the added burden of childcare and home-schooling is starting to shift, behavioural experts are worried that COVID has exacerbated traditional gender stereotypes. In a recent survey conducted by the University of Melbourne, many female respondents reported doing more household chores than ever before. One respondent explained that because they were now always at home, they were feeling a growing pressure to keep the house clean. “Now that I’m working from home, I assume that I’ll have more time so there isn’t an excuse not to keep the kitchen tidy or have the washing done”.

The Australian Public Sector and especially local government and councils have always been known for providing great flexible working options to their employees, and most are in consensus that flexible working arrangements are valued by women in the workforce, as indicated by Public Sector People’s own study.  The challenge now however, is restoring the balance at home.  According to Dr. Pia Rowe, who works for the University of Canberra’s 50/50 by 2030 team, without changing what’s happening at home and the greater social norms on who bares childcare and domestic work, flexible working arrangements won’t be as useful and we won’t see women progressing to leadership roles.

Looking To The Future

This is a complex problem that won’t be resolved overnight and requires a multifaceted approach. However, research and consulting experts believe there are certain policies organisation’s can invest in to maintain the momentum of gender equality, as they readjust their flexible working arrangements.

One suggestion is for organisational leaders (particularly male leaders) to serve as role models by actively taking advantage of flexible working arrangements (e.g. leaving early to pick up their children, taking time off to look after a sick parent) and sharing stories on how they balance the level of ‘unpaid work’ at home. This can help shift and encourage perceptions on domestic and childcare duties being a shared responsibility. Organisations should also promote the initiatives they have in place to support all working parents, like paternity leave (which although available in many organisations can often be stigmatised) or a parent’s network which can offer child care and caregiver support via panel discussions, buddy programmes and additional resources. Finally, organisations can offer structural support to their employee’s, especially as workers start to return to the office. Things like onsite childcare, babysitting referral services, eldercare support, financial planners and wellness providers can help both men and women feel supported by their organisation and reduces the ‘stress’ or ‘guilt’ involved in taking time out of their working day to tend to necessary family or domestic duties.

Creating an equal and diverse workforce, especially within leadership roles isn’t a quick and simple process, however becoming aware of the burden that ‘unpaid work’ can play on working women and putting measures in place to allow both men and women to feel empowered by their flexible working arrangements rather than restricted, can ensure the diversity progress the APS has made, can continue.