Australia Gets Serious on Social Housing

Australia Gets Serious on Social Housing

almost 2 years ago By Emily Harris

You may have seen them jutting out of the inner-city skyline, or know someone who's lived in them. Maybe you’ve lived in them yourself. Regardless, Australia’s public and social housing – buildings which have long faded into the background, have now been cited as playing an integral role in both NSW and Australia’s COVID-19 recovery.

This week, City of Sydney has approved the development of a major social housing project in a bid to combat both the city’s current housing and homelessness crisis, which has only been exacerbated during the pandemic.  This approval is hot on the heels of the NSW government announcing in June that it would invest $36 million into a new ‘Together Home’ project aimed at providing housing and essential support services to those experiencing homelessness in NSW.

Issues surrounding social and affordable housing in Sydney isn’t new. The city has consistently been labelled as Australia’s most expensive city and to date has the country’s highest median value for a house (followed by Melbourne). Soaring real estate prices in both Sydney and Australia has had a two pronged effect. It created significant household debt as people were forced to take out larger mortgages to buy homes and to invest, while ‘would be buyers’ that couldn’t receive financial backing were then locked out of the market. The realisation that you may never own your own home, or live to pay off your mortgage was swift, and by the mid-1990s many individuals and families, especially from middle to low socio-economic backgrounds, chose to rent.

Rents rose faster than wages and many residents suddenly found themselves experiencing rental stress; when a household pays more than 30% of its disposable income to the landlord. According to data from both the Productivity Commission and the ABS, more than half of all lower income tenants renting from a private landlord are in stress. Over the last decade or so, similar situations occurred across the country as major cities experienced rapid house price growth.

Added to the mix was a national decline in social housing. The Government define social housing as secure and affordable rental housing for people on low incomes with housing needs. It includes public housing which is owned by the state, Indigenous housing and community housing which is managed by non-government organisations.  During the post-war decades public sector agencies built more than 15,000 social housing every year. However today, fewer than 4,000 are constructed annually. According to research published by Australian Housing and Urban Research Institute, the national shortfall in social housing is estimated at 433,000 dwellings and in Sydney and Newcastle alone, it has become standard for individuals and families to be put on a five to ten year waiting list at least, to access social and affordable housing. When you can no longer afford your rent or home-loan payments, but can’t access other affordable accommodation options, where do you go? Australia had created the perfect storm for a homelessness crisis…and then COVID-19 hit.

According to the ABS, a person is considered homeless when their current living arrangement:

The most recent Australian Census data on homelessness in 2016, revealed that Australia’s homelessness rate had increased by 4.6% over the last five years and as of the night of the census, over 116,000 were experiencing homelessness in Australia. That’s 50 homeless persons for every 10,000 people.

With the pandemic causing the highest unemployment rate Australia has seen since 1998, the demand for affordable housing options is only expected to grow along with Australia’s homelessness rate. Furthermore, after nine high density public housing estates in Melbourne’s inner north-west were placed in an unprecedented lockdown last month, another layer of complexity has been added to the problem; providing social housing where residents have the space to successfully self-isolate.

The nine-tower ‘hard’ lockdown, which was announced in early July, aimed to contain and treat the COVID-19 outbreak that had occurred within the towers and resulted in 3,000 residents being prohibited from leaving the premises for at least 5 days. Due to the overcrowded nature of these dwellings, the narrow corridors and multiple shared facilities (lifts, laundries etc), the towers are a perfect breeding ground for a highly contagious virus like COVID-19 to spread. These spatial vulnerabilities were one of the key reasons the Victorian Government justified the severe restriction measures. 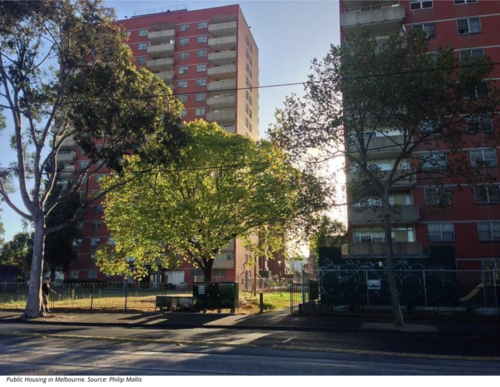 But this isn’t the first time building conditions of public housing has come under fire; there are towers similar to those in North Melbourne all over Australia. Often referred to as ‘vertical cruise ships’ these structures were initially designed in the 1960s construction boom, and have received complaints from residents and local communities for years regarding overcrowding and general decline in building maintenance.

However, COVID-19 has provided a different perspective on the potential threat these living quarters pose to the residents and local community and have made local governments take pause on how to address Australia’s social housing issues going forward.

In regards to The City of Sydney’s latest social housing project, the dual- building proposal will be located in Sydney’s inner west and aims to increase the number of social dwellings currently on the land site (owned by The NSW Government’s Land and Housing Corporation) to 35 total housing units. The proposed planning for the site aims to increase floor space ratio, while each building will be designed around a central core and include ventilated lobbies and line five dwellings per floor; a significant contrast to the dwellings packed onto each floor of the traditional public housing tower structures.

The council believe this project is an exciting opportunity to develop a high-quality residential development, close to public transport, parklands, jobs and services. Furthermore, they believe more projects like this are integral for the city to address it’s deficiency in accommodation options and combat it’s rising homelessness rate amidst COVID-19.

While this project is a positive first-step, City of Sydney has identified the need for an additional 14,000 affordable and social housing dwellings by 2036 and are currently working on future planning proposals. And Sydney is not alone. In addition to the $36 million the NSW government have committed to the ‘Together Home’ project, Victoria, announced a $500 million package in May, to build 168 new social units and upgrade 23,000 more. In WA, the government announced $319 million of a $444 million package, will go towards building, buying, renovating, and maintaining social housing across the state.

Alongside these initiatives, national housing organisations are urging the federal government to invest in social and community housing as part of the country’s overall COVID recovery plan. Organisations like The Community Housing Industry Association (CHIA), Homelessness Australia, National Shelter and Everybody’s Home have developed a ‘Social Housing Acceleration and Renovation Program’ (SHARP) which aims to build 30, 000 homes over the next four years creating up to 18,000 jobs per year in construction in the process. SHARP have estimated the program would require a total government investment of 7.2 Billion dollars but that in the long-term this investment will be integral in helping Australia ‘build it’s way back to a stronger economy’.

This reform which CHIA CEO Wendy Hayhurst believes to be ‘easily achievable’ with national support, adds to the growing number of community groups including the Australian Council for Social Services, trade unions and the Centre for Social Impact, which have been campaigning for the government to increase Australia’s social housing budget. As of yet, no formal commitment to the SHARP program has been made by the federal government, but it seems unanimous amongst all parties involved that investing in social housing is to the country’s benefit; both in restabilising the economy and securing the safety and wellbeing of hundreds of Australians.

While social housing (public, community and state owned and managed Indigenous housing) offer permanent solutions for homeless and ‘at-risk’ renters, there are many additional options that have played a vital role in assisting the homeless, including crisis and transitional housing. Crisis accommodation provides very short-term housing for people who require immediate help while transitional accommodation provides interim housing for a period for period of 12-18 months for those coming out of crisis accommodation. This form of housing is designed to allow individuals time to stabilise their circumstances before progressing to permanent housing.

COVID-19 has seen the use of both crisis and transitional housing increase; when restrictions were first implemented 5000 of Australia’s rough sleepers were sheltered in temporary housing across Australia to protect them from the initial outbreak, while others have required crisis shelter to escape situations at home that have surfaced due the forced lockdown.

Many organisations have been doing their part to ensure these forms of accommodation continue to be accessible and prevalent in our community, especially during this uncertain time. A particular organisation which Public Sector People work closely with, is the Property Industry Foundation (PIF) who focus on bringing the property and construction industry together to build transitional accommodation for the homeless youth. PIF aim to use their network within the building and construction industry, to provide both the human and physical resources necessary to build and renovate homes for a number of official charity partners. During this process, PIF will fundraise on the charities’ behalf to raise funds for each build.

Today is the last day of the Property Industry Foundation’s 30-Day challenge. To find out more about the event or to donate to the worthy cause before time runs out- click on the link below: